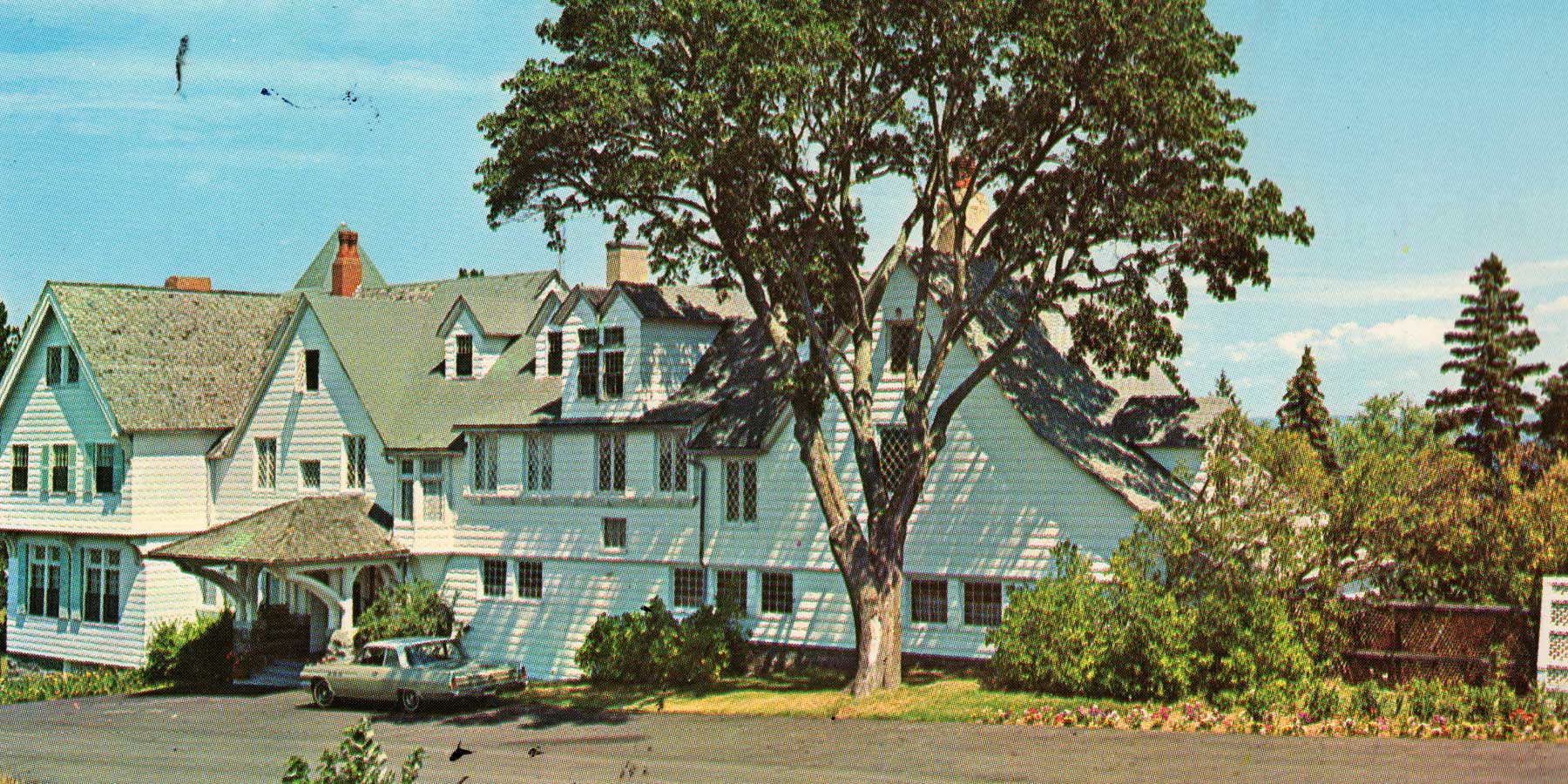 Cleftstone Manor was built in 1881 and is a classic summer cottage of that era. Called cottages, the summer homes of Bar Harbor’s Golden Age had numerous bedrooms, ballrooms were not uncommon, servants quarters a must, and they were not at all what one associates with the word cottage.

Charles T. How, a Boston attorney and the first real estate developer of Bar Harbor, purchased 100 acres for $1,500 in 1872. The Cleftstone was built a few years later and the rest of the land divided into lots, named Woodbury Park. This became a desirable location for summer cottagers, and massive homes such as Mizzentop, Belmont, Beau Desert and Steepways were part of this exclusive neighborhood. Property values rose quickly, and in 1886 one lot in Woodbury Park sold for $40,000. The streets buzzed with the activity of delivery wagons bringing groceries. Servants, tradesmen, and laborers went about their daily business, and the carriages of the privileged young men and women who summered here and their notable parents passed by. This was the hey day of Bar Harbor, then named Eden.

Cleftstone Cottage, as it was called then, was designed by architect Bruce Price who designed the Chateau Frontenac in Quebec City. The name comes from a large cleft in the granite about fifty feet from the main entrance. Price also designed The Turrets, which is now part of College of the Atlantic. The original cottage was actually two structures. There was a main house with six bedrooms and one bath, and a smaller building for the staff. This servant building did not have a bath, but did include a laundry room.

A history of hospitality was established early on. The Hows used Cleftstone as a seasonal rental home. The Mount Desert Herald’s social column is a testament to the popularity of Cleftstone, and the cream of Bar Harbor society attended balls, dinner parties, and afternoon teas at the cottage.

Prominent renters included Emmons Blaine, son of Secretary of State James G. Blaine, and Joseph Pulitzer, the New York publisher and originator of the Pulitzer Prize. Pulitzer spent several summers at Cleftstone, where he would have a servant read to him every night. This eccentric publisher editorialized against great wealth, yet led Bar Harbor society with yachting parties, balls, and lavish spending. He brought his own dining table and because of the unusual size chose to leave it here rather than move it when he purchased his own cottage, Chatwold.

In 1893, Frank Ellis, a lawyer from Cincinnati, and his wife Laura purchased Cleftstone. The expansive home was made even larger with the addition of a servants wing. This was still not enough space, however, and in 1903 the master bedroom suite and a ballroom were added. This spacious and elegant room was used for parties, and in 1911 a reception honoring President Taft was held. In addition to a talent for throwing spectacular parties, Frank Ellis had a reputation as the black sheep of the family. His grandson recalls family visits with his grandfather, who he said had a fondness for drink.

The Ellises divorced, Laura married Gist Blair, and wintered at Blair House in Washington and summered at Cleftstone in Bar Harbor. The cottage was passed on, family lost interest, and it became empty for the first time in its long and colorful history. Three days before the devastating fire of ‘47, Josephine McCaffrey purchased Cleftstone, planning to turn it into an inn. She was out of town the day of the fire, uninsured, and legend has it the students from the seminary across the street kept hosing down the grass around the building. Whatever the reason, Cleftstone escaped the flames while neighboring houses burned to the ground, and Josephine converted the home to a hotel.

Cleftstone has been welcoming guests ever since. In the 1980's it was restored and refurnished with antiques and period pieces, and it once again glows with the history and ambience of Bar Harbor’s Golden Age.